Top Cities for HVAC Installers in 2022

Heating, venting, air conditioning, and refrigeration (HVAC and HVAC/R) technicians and installers are in high demand. Climate control is requisite for businesses, industries, institutions, and homeowners. It’s needed for comfort, preservation of food, and medical and research facilities.

Just like other industries, the HVAC industry as a whole also experienced some shortages and delays due to the impact of the coronavirus pandemic. However, it was extremely clear that HVAC/R technicians were still required and perhaps in higher demand at some places such as Las Vegas, which has temperatures reaching well over 100. Trained HVAC technicians are required in places like these for meeting the growing demand for HVAC services.

The continued increase in the need for individuals with installation, maintenance, and repair skills is confirmed by the Bureau of Labor Statistics (BLS 2021). Their data indicates that openings for HVAC professionals will grow 5 percent nationwide between 2020 and 2030—which is just slightly slower than the anticipated average growth for all occupations (8 percent).

Air Conditioning Refrigeration News attributed most of the industry growth to technology. Many HVAC/R systems have become part of the Internet of Things (IoT). Although the HVAC industry suffered a setback in 2020 due to the pandemic, the Air Conditioning Refrigeration News was optimistic about the future of this industry for 2021. ACHR News also shows how this industry has adapted to changing environment just a year after the pandemic.

HVAC and HVAC/R installation require skilled technicians. The equipment has become increasingly sophisticated, and the system is an integral part of the IoT in many structures. More and more of the components are automated, but the installation still requires a skilled professional and every system is unique.

Using rates of new construction and other factors, this guide explores the top cities for HVAC installers in the U.S. in 2022.

Which States Have the Highest Construction Rates?

According to Research and Markets (September 2020), nearly 61 percent of the construction market is located in ten states. The following five states report the most construction work:

The remaining five of the top ten states for construction are Washington, Georgia, North Carolina, Pennsylvania, and Ohio.

Which States Employ the Most HVAC Workers?

The Bureau of Labor Statistics (BLS May 2021) found that the following states currently have the highest number of HVAC and HVAC/R workers employed:

According to Projections Central (2022), the following fifteen states are expected to have the highest projected percentage increase in positions for HVAC mechanics and installers between 2018 and 2028:

The ranking is slightly different when projected changes are expressed as the absolute number of jobs added rather than as a percentage. The states with the highest expected number of new openings for HVAC mechanics and installers include:

The demand varies among states due to their economy, their weather, and their industrial and business bases. The rate of new construction also affects the demand for installers.

Which Cities Employ the Most HVAC Workers?

The BLS (May 2021) found that the following metropolitan divisions currently employ the highest number of HVAC mechanics and installers:

The data shows that the cities with the highest rate of employment are not always in the states of high employment. The New York-Newark-Jersey City area, for example, is first on the list; however, neither New York nor New Jersey overall is the highest-employment state for HVAC, although each ranks higher than some other states.

The BLS (May 2021) found that the following metropolitan divisions have the highest rate of pay for HVAC professionals:

There is little correlation in these areas between employment and pay. At first glance, there appears to be some correlation in California, as it has three metropolitan divisions ranked as high-paying. Those areas, however, are in the northern part of the state, while the metropolitan area with the highest employment is in the southern part of the state.

In October 2020, WalletHub released its list of ‘2020’s Fastest-Growing Cities in America.’ Although their data doesn’t specifically address construction activity, growth requires new homes and workplaces, thus adding to the demand for HVAC installers and mechanics. The top ten are:

According to Quicken Loans (November 2021), the fastest-growing cities based on their overall population and what makes them attractive are as follows:

There is little correlation between the two sets of statistics, as they cover different growth factors. What is worth noting is that the greatest increase in population growth is not in the cities that appear to be experiencing the most economic growth. Population growth and expanding economies both point to the need for HVAC technicians, although the systems they will be installing and servicing may require differing specialties.

Mixed-use buildings lead the way in new construction, followed by structures for residential, educational, commercial, healthcare, and hospitality use. Their criteria for determining the number of new buildings is the number of cranes at work. The data, therefore, only reflects construction in progress.

Additionally, Dodge Data & Analytics (2021) quoted that “the early months of the pandemic led to construction moratoriums and project delays in many of the country’s largest cities, resulting in very low levels of activity in April and May 2020. Additional insight on the health of these markets can be ascertained by comparing the first six months of 2021 to the same period in 2019—before the pandemic.”

Based on this, Dodge Data & Analytics shows the top ten metro areas for ‘commercial and multifamily construction starts’ during the first half of 2021:

Only five cities are on both lists, due to the varying criteria used and dates on which the data was collected.

What Are the Best Cities for HVAC Workers?

So, which cities are the best choice for someone seeking work as an HVAC/R mechanic or installer? The answer depends on whether a worker is looking for the highest pay or the best job opportunity.

As noted above, the states with the highest expected number of new openings for HVAC mechanics and installers (Projections Central 2022) are:

As noted earlier, the best cities for HVAC workers are not necessarily located in the top-employing or top-paying states. Taking the above data and weather patterns into consideration, the top ten metropolitan areas for HVAC professionals in 2022 are:

Sandra Smith was introduced to the HVAC industry when she worked as a bookkeeper and secretary for a small air-conditioning contractor. She eventually became a CPA and started her own practice specializing in small business taxes and accounting. After retiring from business, she began writing articles for newspapers, magazines, and websites. She also authored four books. Sandra makes her home in the mountains with a rescue dog that naps on her lap as she writes. Are you wondering why you might consider pursuing an HVAC degree? View our in-depth, side-by-side comparison to determine whether to invest in an HVAC diploma,...(more) 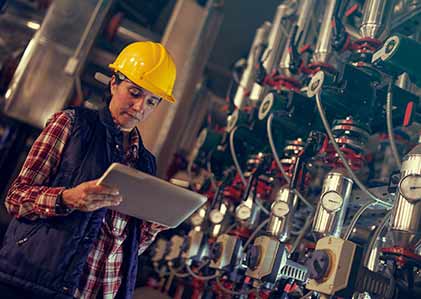 Heating, ventilation, air conditioning, and refrigeration appliances and systems are integral to most modern buildings. Not only do they keep living and workspaces cool and...(more)